Jump cuts are used in movies to add a sense of speed to a scene, boosting the kinetic and visceral feel of the action. The technique can also be used to portray characters as disoriented or confused without using special effects. Here are some examples of jump cuts. You may find them useful in your next production. Read on to learn more! But before you start implementing them, you should understand what they are and how they work.

Examples of jump cuts in film 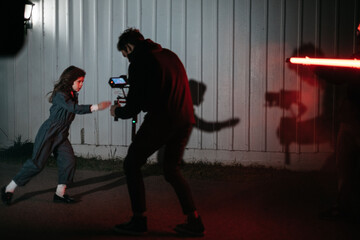 There are two main ways of overcoming the issues caused by jump cuts in film. The first method is to cut away to another shot in the same scene. Another technique is to cut to another actor or point of interest. Many YouTubers make entire videos talking into the camera. Both approaches are effective ways to break up long scenes. However, long shots do have their place in cinema, too. Directors like Coppola, Kubrick, and Scorsese can use them to create simmering tension.

The second method of using jump cuts in film is through seamless dissolve. Films predating Jean-Luc Godard’s Breathless heavily used the seamless dissolve. Jump cuts became popular after this film. Jump cuts are controversial because they often violate the principles of classical continuity editing, which emphasize the idea of continuous time while deemphasizing the editing process. While jump cuts are often a creative choice, they tend to emphasize the constructed nature of the film. Moreover, they can occur more than once in a single sequence.

A jump cut can also be used to emphasise kineticism in a scene. For instance, in the film “Breathless”, Godard uses a jump cut to show Jean Seberg riding in a convertible. The jarring effect created by the jump cut is intentionally played up to emphasize the disjointed nature of the scenes. Other film makers have tried to emulate this effect with this technique, as seen in Guy Ritchie’s Snatch and Tom Tykwer’s Run Lola Run. These techniques are also commonly used in television editing. For instance, jump cuts are used in a variety of movies, including the Universal Monsters films and music videos.

Since Godard first introduced the jump cut technique in the 1960s, filmmakers have used it to create unusual effects and enhance the pace of the story. Jump cuts are effective in showing how a character changes positions in a single shot. They also help to convey the passage of time without requiring the audience to watch. Moreover, they are effective in creating the effect of a character’s point of view without using any special effects.
They add speed to the sequence of events

The French New Wave revolutionized filmmaking and threw the rules out the window. Jean-Luc Godard’s 1960 film Breathless is an excellent example. It is a criminal love story in which expectations are deconstructed. Jump cuts add a sense of speed to the film. The tense and fast-paced scene is not only effective, but also a highlight of the film.

One of the most effective uses of jump cuts is to illustrate the passage of time. A jump cut can be used to add levity to a dark film by portraying multiple women at once, particularly when the action is fast-paced. Jump cuts can also be used to show time compressing. In the film The Babadook, for instance, a character cuts his hair. The jump cut allows viewers to imagine the state of Richie’s psyche, which has an unstable emotional state.

A film can also employ a jump cut to emphasize the film’s dynamism. Jump cuts add speed to the sequence of events by placing viewers in Lola’s mindset. However, the human eye is naturally drawn to continuous movements. Jump cuts can also create a mood in the audience. This is why so many films avoid them. They create a sense of urgency, which helps the film’s audience feel a greater urgency.

Jump cuts are a common technique in filmmaking. They are created by removing a middle portion of one continuously filmed shot, and can be used to tell a story, or convey a certain sense of time. These cuts can be jarring and can alienate the viewer. Jump cuts are often used to make a point or focus the audience on a political message or emotion. A notable example is the ‘air mattress to Mrs. Robinson’ cut in the classic film The Graduate.

The term jump cut was first used in the 1940s to describe any sudden cut or edit in a film. It is used to describe a sequence of scenes that are cut together in different ways. A good example is the 2001 film, where a primitive ape is seen throwing a bone at a similar-shaped space station and then cutting to another similar shot.

Jump cuts have many uses. In fashion videos, for example, influencers can use jump cuts to show the different pieces of clothing they wear. Another example is an influencer showing a look on a vogue website. The jump cuts can also be used to show a spacecraft revolving around a limb. These films are popular due to their evocative effect.

In satire, jump cuts have become a popular choice among filmmakers. A satirical series of videos called Kaneings, produced by Russell Kane, uses this technique to respond to current events. It can be a powerful storytelling tool. In films like “A Serious Man”, a jump cut plays a major role. The film’s main character, Mr. Coen, is shown in mid-jump. Jump cuts became popular in the 1990s after Arthur Schneider won an Emmy Award for pioneering the use of the technique.